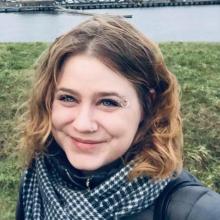 Jessica Werneke is a Visiting Assistant Professor of History at the University of Iowa and former Assistant Professor of Comparative Humanities at Habib University in Karachi, Pakistan. She received her BA in History from the University of Iowa (2007) and Ph.D. in Modern European History with a concentration in Russian and Soviet visual culture from the University of Texas at Austin (2015). Afterwards, she held postdoctoral research fellowships at the International Centre for the History of World War II and its Consequences at the Higher School of Economics in Moscow Russia and was a British Academy Newton International Fellow at Loughborough University in the UK. Dr. Werneke has taught broadly in history, but primarily her courses focus on modern Russian cultural history, Europe after World War II, as well as historiography and historical methods.

Dr. Werneke’s research lies in Soviet visual culture and she has spent the majority of her academic career examining the Soviet photography journal Sovetskoe foto (The Soviet Photo). Her PhD and subsequent articles have focused on Soviet photography and the intersections of art and photojournalism, amateurism, and the gendered aspects of the photography club environment in the USSR after World War II. Similarly, she examines how the unique political and cultural context of the “Thaw” provided photojournalists and amateur photographers the opportunity to renew classic discourses about photography’s artistic, aesthetic and documentary properties. Her current projects focus on interpretations of Soviet photography theory and amateur photography clubs in the late Soviet period, particularly in the Baltic Republics of Latvia, Lithuania and Estonia.