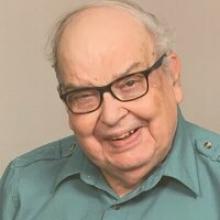 Ellis Hawley, a much-admired historian of the 20th-century United States, died on September 15, 2020. He was a beloved faculty member, colleague, and mentor to a veritable army of junior colleagues and graduate students at the University of Iowa and around the country.

It is difficult to overstate the importance of the originality Hawley brought to the study of American political economy and political development. With his earliest work, The New Deal and the Problem of Monopoly: A Study of Economic Ambivalence (Princeton Univ. Press, 1966), he reshaped interpretation of the New Deal’s often contradictory prescriptions for economic recovery and institutional reform. This led him to examine the origins and nature of Herbert Hoover’s idea of the associative state—an approach to public policy that prescribed a new form of “private government” in which the state would manage and guide private actors by facilitating their self-organization rather than regulating markets directly. Hawley also emphasized the enduring influence of the Great War on domestic policy, and the impact Hoover’s ideas had on American politics and public life. These insights are embodied in The Great War and the Search for a Modern Order: A History of the American People and Their Institutions, 1917–1933 (Waveland Press, 1979) and in his contributions to Herbert Hoover and the Crisis of Modern Capitalism (Schenkman Publishing, 1973).

The interpretive originality of Hawley’s work is most concisely and powerfully put forth in his influential essay “Herbert Hoover, the Commerce Secretariat, and the Vision of an ‘Associative State,’ 1921–1928” (Journal of American History, 1974). He argued that Hoover as secretary of commerce sought to reinvent the American state as an instrument for guiding business associations and trade groups toward a more cooperative and efficient “non-statist commonwealth.” The body of his scholarship has been both an inspiration to and critique of the new Hoover revisionism in recent decades. One of his last published works, “Herbert Hoover and the Historians—Recent Developments: A Review Essay” (Annals of Iowa, 2018), engages the newest scholarship on Hoover and, with his characteristic modesty, understates his own place in the field. In an era when distrust of “big government” remains politically salient, Hawley’s focus on Hoover’s alternative to statism contributes to the continuing relevance of his work. In 1995, the Organization of American Historians established the annual Ellis W. Hawley Prize in his honor for “the best book-length historical study of the political economy, politics, or institutions of the United States in its domestic or international affairs from the American Civil War to the present.”

Born in Cambridge, Kansas, Hawley earned a bachelor’s degree from Wichita State University, a master’s from the University of Kansas, and, after two years of service as a second lieutenant in the US Army (1951–53), a PhD at the University of Wisconsin–Madison in 1959 under the guidance of Howard K. Beale. The abiding influence of his years at Madison and his work with Beale are discernible in his early scholarship on the New Deal and corporatism, and what might be termed a “Beardian” focus on the interplay of economic institutions and the state. From 1957 to 1968, he taught at North Texas State University, where he rose to full professor, before coming to the University of Iowa, by way of Ohio State University, in the fall of 1969. He served the balance of his long and much-celebrated career at Iowa, including a term as department chair from 1986 to 1989, and retired in 1994. At Iowa, he had a profound influence on generations of students who took his always-popular courses on the New Era/New Deal, on the rigorous graduate comprehensives fields he supervised, and, in particular, on the 19 students whose dissertations he directed to completion, at least 10 of which have been published as monographs.

Ellis Hawley was deeply revered by his colleagues and his students alike—for the brilliance of his scholarship, for his deep commitment to his department and its democratic culture, for the modesty of his bearing, and for the high ethical standard he always embodied in his personal and professional interactions. He leaves a rich legacy as a historian, teacher, and deeply humane person.