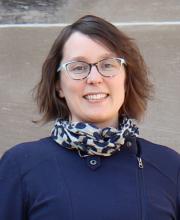 Elizabeth Yale is a historian of science and the book in Britain and Europe. She is the author of Sociable Knowledge: Natural History and the Nation in Early Modern Britain (University of Pennsylvania Press, 2016). With Vera Keller and Anna Marie Roos, she co-edited Archival Afterlives: Life, Death, and Knowledge-Making in Early Modern British Scientific and Medical Archives (Brill, 2018).

She is currently working on two book projects. The first, in collaboration with James T. Costa (Western Carolina University), is an annotated edition of Charles Darwin, The Descent of Man, and Selection in Relation to Sex (1871). The second is a study of how early modern learned families created, communicated, and preserved scientific and medical knowledge. Paying close attention to the material practices of communication and record-keeping, she argues that extended household collectives whose members included wives, children, siblings, and servants helped lay the foundations of today’s scientific information infrastructures.

She is currently serving as the President of the Andrew W. Mellon Society of Fellows in Critical Bibliography at Rare Book School, of which she is a Senior Fellow. In 2016, she was a Visiting Scholar at the Max Planck Institute for the History of Science in Berlin. Dr. Yale received her PhD in the History of Science at Harvard University in 2008 and taught at Western Carolina University and Harvard before coming to Iowa.

With Matthew Brown (Department of English and UICB), she has been awarded an NEH Humanities Initiatives Grant for a three-year project to develop an undergraduate laboratory space and related curriculum that would engage students in the study of global print and manuscript cultures.