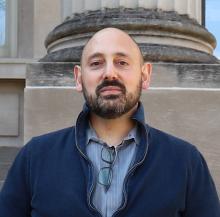 Ari Ariel is a historian of the modern Middle East, with a particular focus on Jewish communities in the Arab world and Mizrahi communities in Israel. His interests include ethnic, national, and religious identities, migration, and foodways. His first book, ​Jewish-Muslims Relations and Migration from Yemen to Palestine in the Late Nineteenth and Twentieth Centuries (Brill, 2014), analyzes the impact of local, regional and international events on ethnic relations in Yemen, and on Yemeni Jewish migration patterns. It argues that global transformations, such as improved transportation technologies, the integration of Yemen into the world economic system, and increased transnational contact with non-Yemeni Jews, were the underlying factors provoking Yemeni migration to Palestine.

Dr. Ariel has also published work on the Hummus Wars and on Middle Eastern Jewish foodways, and is the editor-in-chief of NYFoodstory: The Journal of the Culinary Historians of New York.

His current project follows Yemeni Jews as they moved abroad, asking how migration impacted Yemeni culture and identity, and how Yemeni Jews negotiated their interactions with Jewish and Muslim communities in their new homes.

Ari received his Ph.D. from Columbia University in 2009.