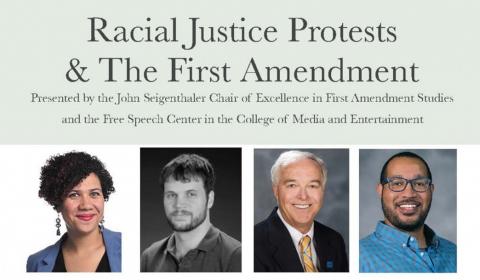 "Racial Justice Protests and the First Amendment" will be held in a Zoom virtual event at 2:30 p.m. Sept. 16. It is presented by the John Seigenthaler Chair of Excellence in First Amendment Studies and the Free Speech Center, both part of the College of Media and Entertainment at MTSU.

Ashley Howard, an assistant professor of African American history at the University of Iowa.  Her book manuscript analyzes the 1960s urban rebellions in the Midwest, grounded in the way race, class, gender, and region played critical and overlapping roles in defining resistance to racialized oppression.  Dr. Howard's scholarship has been featured in The Chronicle of Higher Education, BBC Mundo, Al Jazeera, Associated Press, TIME magazine and NPR.

Ryan Haas, news editor with Oregon Public Broadcasting. Haas has led a team of reporters earlier this year in breaking the news that the federal government had deployed massive forces to Portland, Oregon, to quash Black Lives Matter protests. His work has been nominated for two National Magazine Awards in recent years and has often focused on anti-government extremism and unrest in the American West.

Ken Paulson, director of the Free Speech Center and a professor in the Recording Industry Department at Middle Tennessee State University. He is also the former dean of MTSU’s College of Media and Entertainment. He is also the former editor-in-chief of USA TODAY and remains a columnist on USA TODAY’s board of contributors, writing about media and First Amendment issues.

Keonte Coleman, an assistant professor in the school of Journalism and Strategic Media at MTSU will moderate.

You may register in advance for the webinar (and receive reminders with information before the event) or simply join the webinar when it begins.