Home » Iowa Stories: Why in the World Study Diaries?

Iowa Stories: Why in the World Study Diaries? 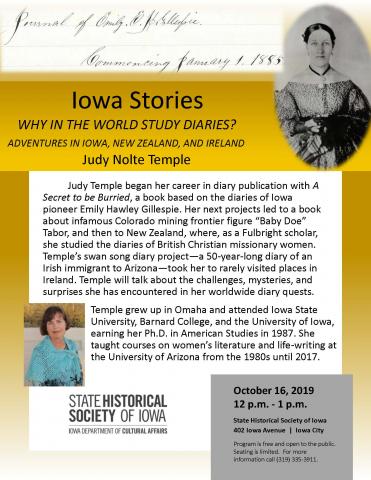 Judy Nolte Temple began her career in diary publication with A Secret to be Burried , a book based on the diaries of Iowa pioneer Emily Hawley Gillespie. Her next projects led to a book about infamous Colorado mining frontier figure “Baby Doe” Tabor, and then to New Zealand, where, as a Fulbright scholar, she studied the diaries of British Christian missionary women.  Temple’s swan song diary project a 50 year long diary of an Irish immigrant to Arizona took her to rarely visited places in Ireland. Temple will talk about the challenges, mysteries, and surprises she has encountered in her worldwide diary quests.

Temple grew up in Omaha and attended Iowa State University, Barnard College, and the University of Iowa, earning her Ph.D. in American Studies in 1987. She taught courses on women’s literature and life writing at the University of Arizona from the 1980s until 2017.