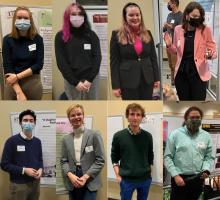 “ICRU promotes undergraduate involvement in research and creative projects at the University of Iowa, serving students, staff, and faculty.”

The University of Iowa Department of History had eight undergraduate honors students present their research on a variety of subjects. Learn more about the student’s research below. 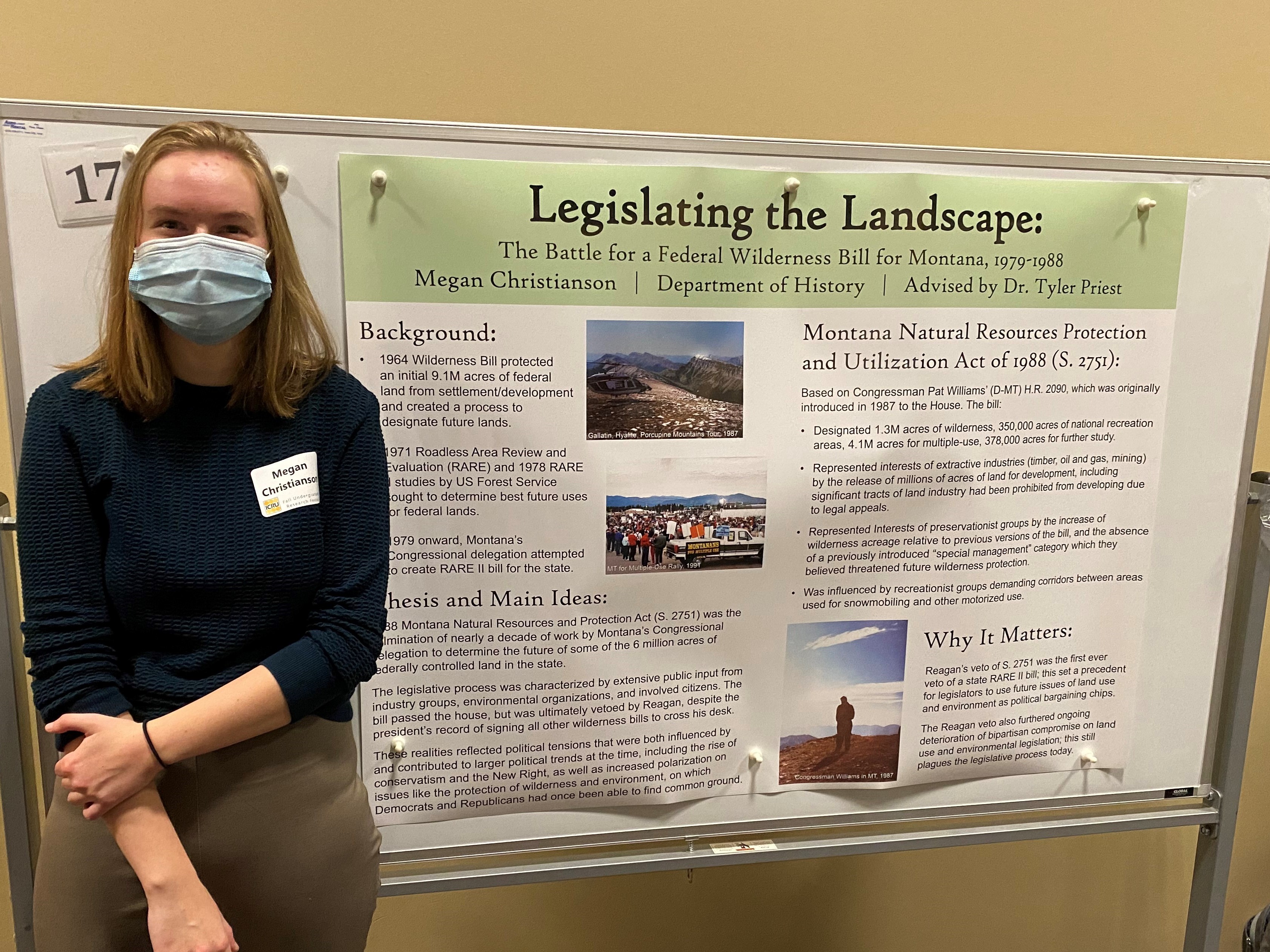 Legislating the Landscape: The Battle for a Federal Wilderness Bill for Montana, 1979-1988

In 1988, Congress passed the Montana Natural Resources Protection and Utilization Act. It was the culmination of nearly a decade of fierce public debate, involving local and national forces including timber and mining industry interests, conservation groups like the Wilderness Society and Sierra Club, and local groups like the Blackfeet Tribe, farmers and ranchers, and recreationists. Despite broad support from Congress, and a previous record of passing other wilderness designation bills, President Reagan killed the bill with a pocket veto. This research examines the contributions of interest groups and the larger political forces at play in the late 1980s. 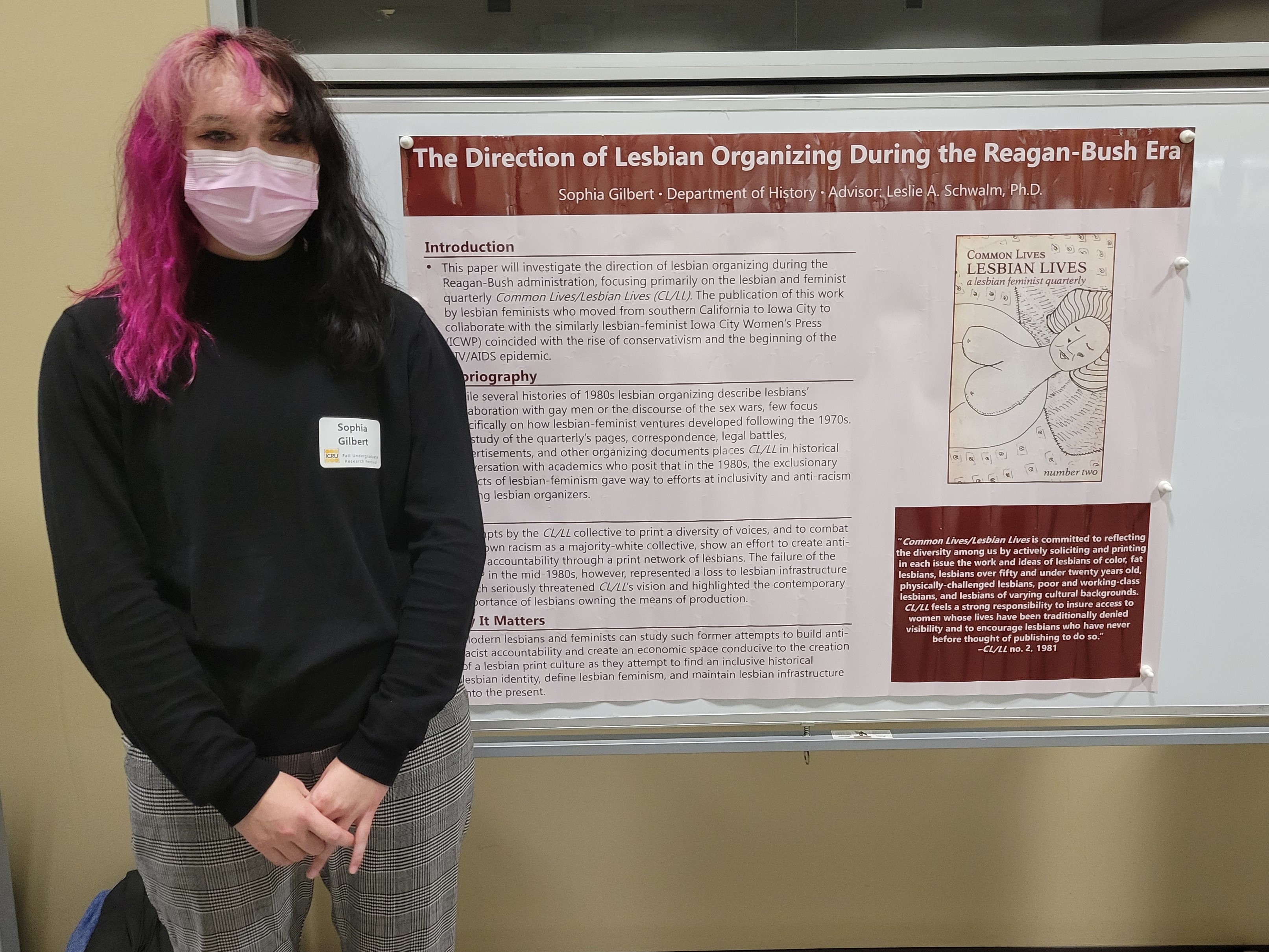 The Direction of Lesbian Organizing During the Reagan-Bush Era

My research investigates the direction of lesbian organizing during the Reagan-Bush administration, focusing primarily on the lesbian and feminist quarterly Common Lives/Lesbian Lives (CLLL). The publication of this work by lesbian-feminists who moved from Los Angeles to Iowa City to collaborate with the similarly lesbian-feminist Iowa City Women’s Press (ICWP) coincided with the dwindling lesbian-feminist movement, the rise of conservativism, and the beginning of the HIV/AIDS epidemic. While several histories of 1980s lesbian organizing describe lesbians’ collaboration with gay men or the discourse of the sex wars, few focus specifically on how lesbian-feminist ventures unfurled following the separatist-focused 1970s. My study of the quarterly’s pages, correspondence, legal battles, advertisements, and other organizing documents places CLLL in historical conversation with academics who posit that in the 1980s, the exclusionary aspects of lesbian-feminism gave way to efforts at inclusivity and anti-racism among lesbian organizers. Attempts by the CLLL collective to print a diversity of voices, and to combat their own racism as a majority-white collective, show an effort to create anti-racist accountability through a print network of lesbians. The failure of the ICWP in the mid-1980s, however, represented a loss to lesbian infrastructure which seriously threatened CLLL’s vision and highlighted the contemporary importance of lesbians owning the means of production. “Injure Their Reputation, and Terminate Their Life”: Privacy for Venereal Disease Patients in Early Modern England “It Ought to Be Possible”: The Kennedy Administration, Black Radicalism, and the Civil Rights Movement, 1963

In the first years of his presidency, President Kennedy did not express a deep commitment to furthering the cause for civil rights. Rather, the Administration often took steps to de-escalate race relations rather than champion Black rights. However, by June of 1963, President Kennedy announced his support for civil rights legislation that would later become the Civil Rights Act of 1964. This thesis will examine the role that a fiery meeting in May of 1963 between Attorney General Robert Kennedy and author James Baldwin had on moving the Kennedy administration to support civil rights legislation and federal involvement. Already alarmed about the growing popularity of militant Black radicalism of Black youth, the May 1963 meeting prompted the Kennedy Administration to act to avoid further alienation of Black citizens. Further, it aims to recognize the impacts of radical Black activism on the federal government and civil rights protections of Black Americans.

This thesis also seeks to challenge the contemporary popular notions about the Kennedy administration’s fervent role in furthering civil rights, as well as acknowledging the role the federal government has played, ranging from laissez- faire to obstructionist, regarding the Civil Rights Movement and the greater American Black Freedom Struggle. 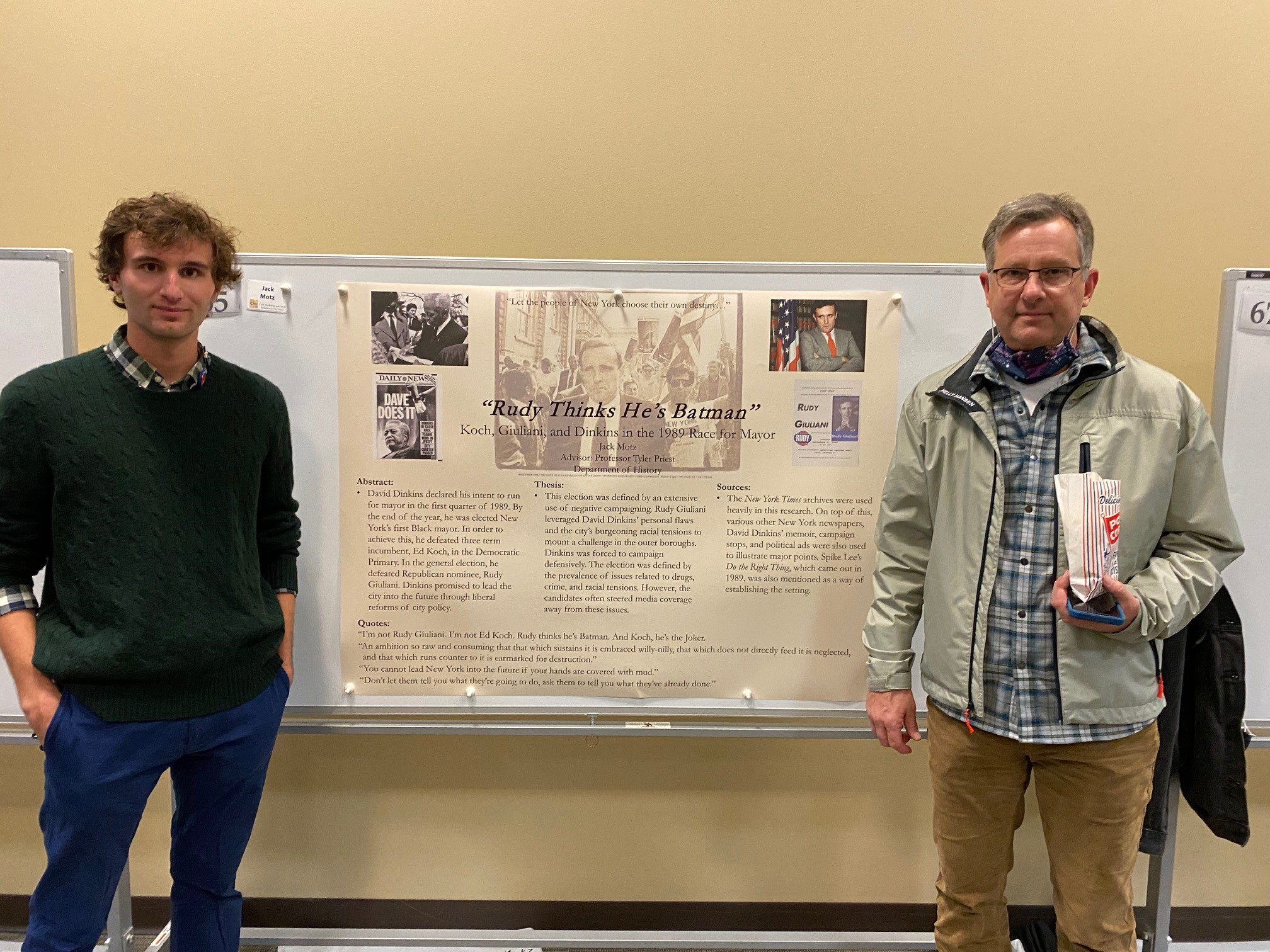 “Rudy Thinks He’s Batman”: Koch, Giuliani, and Dinkins in the 1989 Race for Mayor

The research covers the 1989 New York mayoral election between Ed Koch, Rudy Giuliani, and David Dinkins. It looks into the strategies and images that each of the candidates used in order to run for mayor. Holding Out For a Hero(ine): A Postfeminist Analysis of Superhero Stories from the 1980s

This research thesis focuses on the 1980s and how postfeminism existed within popular culture. Postfeminism is an ideology that believes feminism at minimum ended with the second wave and no longer functions as necessary, as women seem to have legal equality now. I look at postfeminism through the lens of superhero stories from the 1980s. Ultimately, the stories presented show how the overall rejection of feminism in favor of postfeminism after the “success” of the second-wave affected superhero comic culture in America. Additionally, I will look at the inclusion of this ideology around women’s rights in the 1980s in a part of pop culture traditionally produced for men. Men were typically the primary consumers of superhero stories in the 1980s, so the inclusion of feminism (or lack thereof) demonstrated how second-wave feminism and postfeminism impacted the content produced for several groups, including those that were not necessarily directly impacted by these movements. 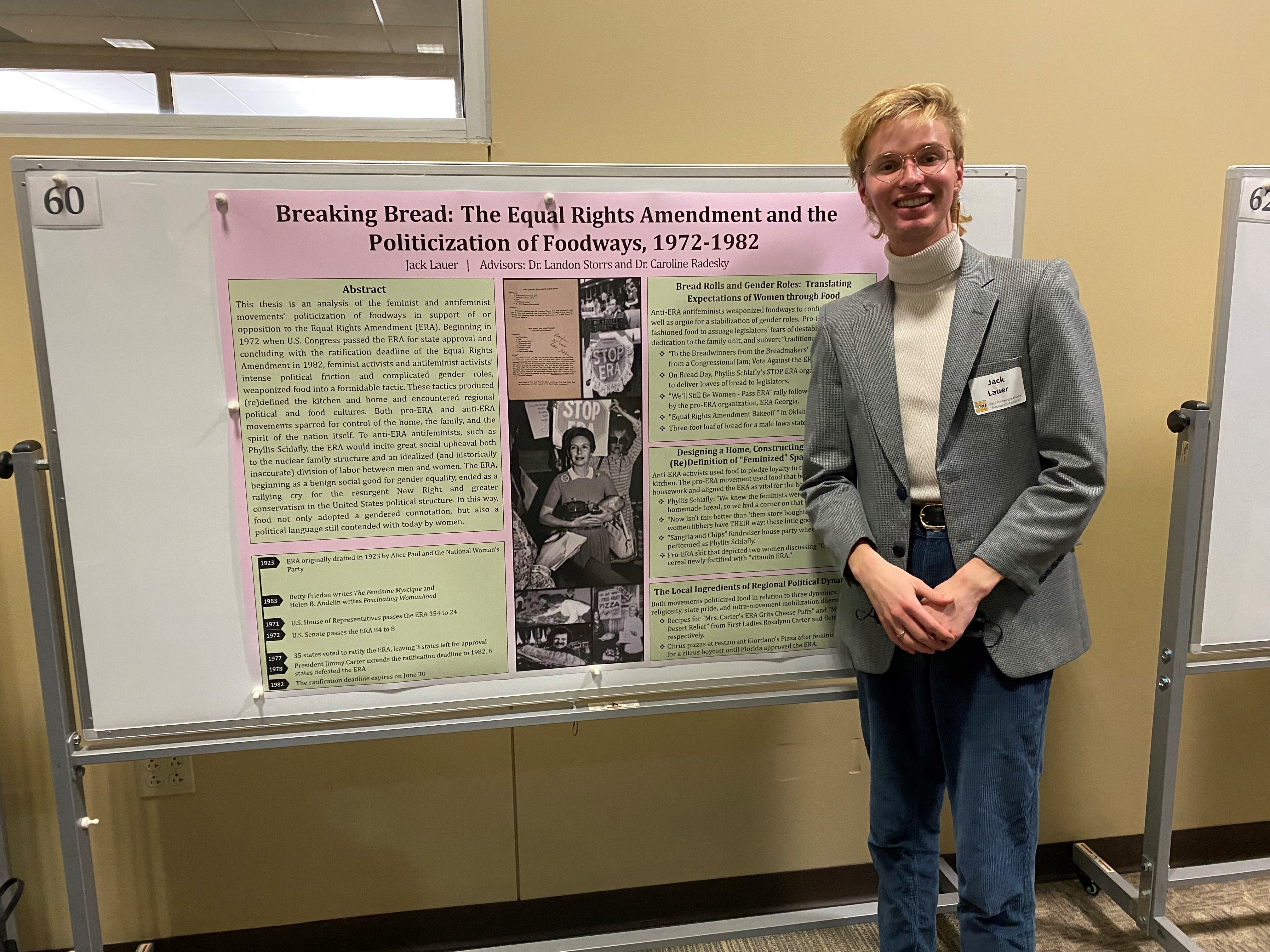 Breaking Bread: The Equal Rights Amendment and the Politicization of Foodways, 1972-1982

This project is an analysis of the feminist and anti-feminist politicization of foodways and cooking in support or opposition to the Equal Rights Amendment (ERA). Beginning with the year 1972 when the ERA was passed by the U.S. Congress and concluding with the failed ratification deadline of the ERA in 1982, food and cooking was a formidable strategy used by both anti-ERA antifeminist groups and pro-ERA feminist movements. Feminists and anti-feminists politicized foodways in support and in opposition to the Equal Rights Amendment (ERA) that confirmed and rejected gender roles/expectations, (re) defined the kitchen and home as a feminized space, and reflected complex political contexts. 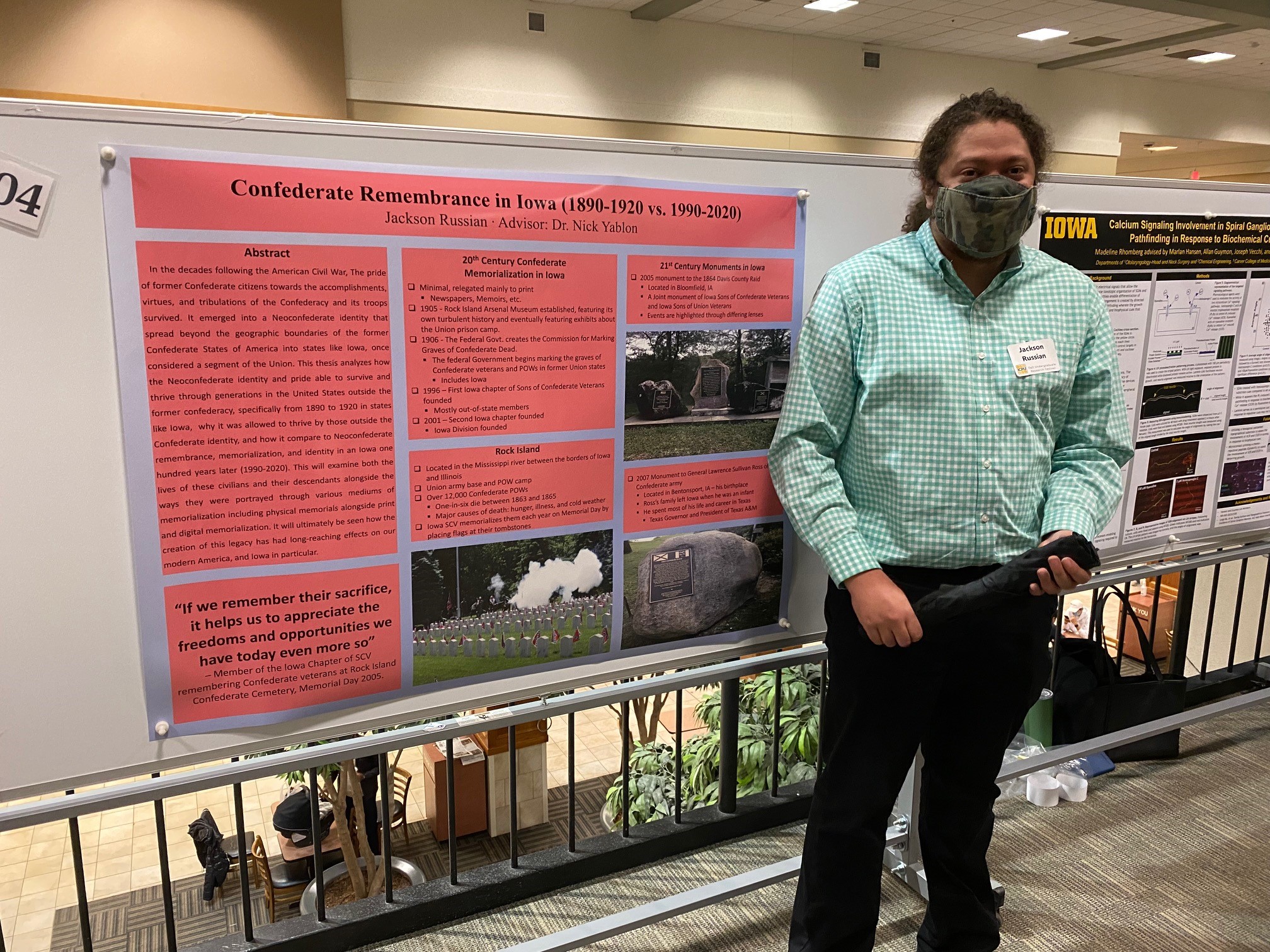 In the decades following the American Civil War, the pride of former Confederate citizens towards the accomplishments, virtues, and tribulations of the Confederacy and its troops survived. It emerged into a Neo-confederate identity that spread beyond the geographic boundaries of the former Confederate States of America into states like Iowa, once considered a segment of the Union. How was the Neo-confederate identity and pride able to survive and thrive through generations in the United States outside the former confederacy, specifically from 1890 to 1920 in states like Iowa? Why was it allowed to thrive by those outside the Confederate identity? How does it compare to Neo-confederate remembrance, memorialization, and identity in an Iowa one hundred years later (1990-2020)? The ways the confederacy and its veterans are remembered will be examined through they were portrayed in mediums of memorialization including physical memorials alongside print memorialization through newspaper articles and books from each period. It will ultimately be seen how the creation of this legacy has had long-reaching effects on our modern America, and Iowa in particular.