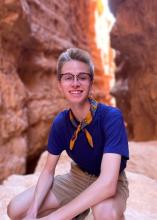 Jack is a senior from Pleasantville, Iowa double majoring in History and Gender, Women’s & Sexuality Studies with minors in Political Science and International Relations, whose involvement includes being the undergraduate student body Vice President for the Undergraduate Student Government, a Resident Assistant in Daum Hall, and a volunteer for the LGBTQ Iowa Archives & Library. Following graduation, Jack intends to travel internationally and work in federal government before pursuing law school.

"Breaking Bread: The Equal Rights Amendment and the Politicization of Foodways, 1972-1982"

My project analyzes feminist and antifeminist movements’ politicization of foodways in support of or opposition to the Equal Rights Amendment (ERA). Beginning in 1972 when U.S. Congress passed the ERA for state approval and concluding with the ratification deadline of the Equal Rights Amendment in 1982, feminist activists and antifeminist activists weaponized food in order to advance their respective arguments vis-a-vis the ERA. These tactics produced intense political friction and complicated gender roles, (re)defined the kitchen and home, and encountered regional political and food cultures. Both pro-ERA and anti-ERA movements sparred for control of the home, the family, and the public image of women. To anti-ERA antifeminists, such as Phyllis Schlafly, the ERA would incite great social upheaval both to the nuclear family structure and an idealized (and historically inaccurate) division of labor between men and women. The ERA, beginning as a benign social good for gender equality, ended as a rallying cry for the resurgent New Right and greater conservatism in the United States political structure. In this way, food not only adopted a gendered connotation, but also a political language still contended with today by women.