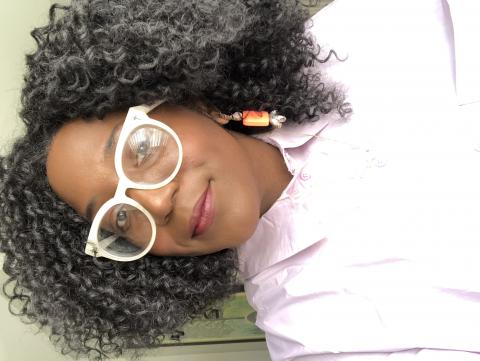 "Changing the Subject: Lynn Nottage’s By the Way, Meet Vera Stark and the Making of Black Women’s Film History"

Lynn Nottage’s 2011 satirical play By the Way, Meet Vera Stark stages the life and legacy of the fictional Vera Stark, a Black maid and struggling actress during Hollywood’s golden age. Nottage, a two-time Pulitzer prize-winning playwright and screenwriter, was inspired in part by the career of African American actress, singer, and dancer Theresa Harris. A tale of Black women’s cinematic representation and social erasure, Nottage’s fabrication of film history extends beyond the staged plot to also include a digital archive documenting Vera’s celebrity and career. In this talk, I examine how Nottage’s play and paratexts produce a speculative fiction and archive about Black women’s media histories, staging what I call a phantom cinema—an amalgam of real and imagined film histories that haunt, trouble, and work with and against cinema histories to creatively illuminate archival gaps in visual culture and the public imagination.

Bio:
Samantha N. Sheppard is Associate Professor of Cinema and Media Studies in the Department of Performing and Media Arts at Cornell University. She is the author of Sporting Blackness: Race, Embodiment, and Critical Muscle Memory on Screen (University of California Press, 2020) and co-editor of From Madea to Media Mogul: Theorizing Tyler Perry (University Press of Mississippi, 2016) with TreaAndrea Russworm and Karen Bowdre and Sporting Realities: Critical Readings on the Sports Documentary (University of Nebraska Press, 2020) with Travis Vogan. She has published essays in numerous journals and edited collections and written for The Atlantic, Flash Art International, and Los Angeles Review of Books. She is currently working on two book projects. The first, Screening Basketball, is under contract with Rutgers University Press. The second project is A Black W/hole: Phantom Cinemas and the Reimagining of Black Women's Media Histories, for which she was named a 2021 Academy Film Scholar by the Academy of Motion Picture Arts and Sciences.