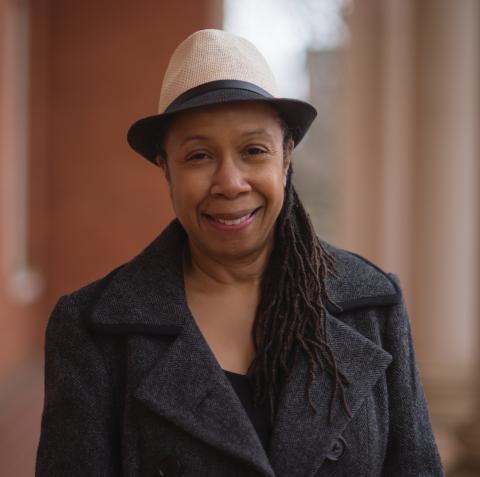 Join Rhondda Robinson Thomas, Calhoun Lemon Professor of Literature, Clemson University, as she discusses her new book, Call My Name, Clemson: Documenting the Black Experience in an American University Community, published this month by the University of Iowa Press.

In the book, Professor Thomas traces her public history project, Call My Name: African Americans in Early Clemson University History, which helped convince Clemson University to reexamine and reconceptualize the institution’s complete and complex story from the origins of its land as Cherokee territory to its transformation into an increasingly diverse higher-education institution in the twenty-first century. Threading together scenes of communal history and conversation, student protests, white supremacist terrorism, and personal and institutional reckoning with Clemson’s past, this story helps us better understand the inextricable link between the history and legacies of slavery and the development of higher education institutions in America. Thomas's research for this book was supported by funding from the National Endowment for the Humanities and the Whiting Foundation. Call My Name, Clemson is the fifth and newest book in the Humanities and Public Life series, co-edited by Teresa Mangum (Obermann Center Director) and Anne Valk (City University of New York), in collaboration with Meredith Stabel, Acquisitions Editor at the University of Iowa Press.

On November 30 at 4:00 p.m. (CST) / 5:00 p.m. (EST), Thomas will speak about her research with Hilary Green, Associate Professor of History, Department of Gender and Race Studies, University of Alabama. The following individuals will also share their experiences of contributing to the project:

This virtual event is free and open to all. Please register to receive the Zoom link.

SPECIAL OFFER for Book Talk attendees! Use sale code THOM25 to receive 25% off Call My Name, Clemson at the University of Iowa Press website.

Thomas's essays have appeared in American Literary History, Southern Quarterly, and African American Review. Dr. Thomas is also the director of the award-winning Call My Name: African Americans in Early Clemson University History research project for which she has been awarded a Whiting Foundation Public Engagement Fellowship, a gift from Dr. James and Edith Bostic Jr. through the Clemson University Foundation, the Algernon Sydney Sullivan Award, and grants from the National Endowment for the Humanities, SC Humanities, and Clemson University’s Office of the Provost. Her exhaustive research over more than a decade has documented the contributions of six generations of both enslaved and free people at Clemson University and the land on which it stands.

Hilary Green is Associate Professor of History in the Department of Gender and Race Studies at the University of Alabama and serves as the co-program director of the African American Studies program. She also has a partial appointment in American Studies. Her research and teaching interests include the intersections of race, class, and gender in African American history, the American Civil War, Reconstruction, Civil War Memory, the US South, 19th Century America, and the Black Atlantic. She is the author of Educational Reconstruction: African American Schools in the Urban South, 1865-1890 (Fordham University Press, April 2016) as well as articles, book reviews, encyclopedia entries, and chapters in The Urban South During the Civil War Era (University of Chicago Press, 2015), Epidemics and War: The Impact of Disease on Major Conflicts in History (Santa Barbara: ABC-Clio, 2018), and Reconciliation after Civil Wars: Global Perspectives (Routledge, 2019). Her article entitled “At Freedom’s Margins: Race, Disability, Violence and the Brewer Orphan Asylum in Southeastern North Carolina, 1865-1872” received the 2016 Lawrence Brewster Faculty Paper Award from the North Carolina Association of Historians. She is the book review editor for the Journal of North Carolina Association of Historians and the Digital Media Editor responsible for Muster, the blog for the Journal of Civil War Era.

Green is currently at work on several projects, including a second book manuscript examining how everyday African Americans remembered and commemorated the Civil War. She is also at work on several pieces exploring the enslaved experience at the University of Alabama and other topics on the African American experience during the Long Reconstruction era, including the "The Burden of the University of Alabama's Hallowed Grounds," The Public Historian 42 (November 2020). Read more at https://hgreen.people.ua.edu/.

This event is co-sponsored by the Obermann Center for Advanced Studies, the University of Iowa Press, and Clemson University College of Architecture, Arts and Humanities.

Individuals with disabilities are encouraged to attend all University of Iowa-sponsored events. If you are a person with a disability who requires a reasonable accommodation in order to participate in this program, please contact Erin Hackathorn in advance at erin-hackathorn@uiowa.edu or (319) 335-4034.