Ina Archer is a visual artist and filmmaker whose work examines the intersections of race/ethnicity, representation, and technology. Her multimedia installations and single-channel works have been shown nationally including at Studio Museum in Harlem, New York, NY; White Columns, NY; Maysles Cinema, New York, NY; Harvestworks, NY; Microscope Gallery, Brooklyn, NY; The List Visual Arts Center at MIT, Cambridge, MA; Contemporary Art Museum, Houston, Texas; Portland Museum of Contemporary Art, Portland, Oregon; and Spelman College Museum of Fine Art, Atlanta, Georgia, among others. Archer was a Studio Artist in the Whitney Independent Study program, a NYFA multidisciplinary Fellow, a Creative Capital grantee in film and video, and she has been awarded numerous residencies. She is a Media Conservator at the Smithsonian National Museum of African American History & Culture and she work with the collection of the Center For African American Media Arts (CAAMA) and the Great Migration Home Movie Project, a public digitization initiative funded by the Robert F. Smith Center.  Archer received a BA in Film/Video from Rhode Island School of Design and an MA in Cinema Studies from NYU. She was born in Paris, France and currently lives and works between Washington DC and Brooklyn, NY. Archer is represented by Microscope Gallery in New York. 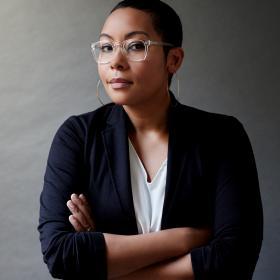 Racquel Gates is an Associate Professor of Cinema and Media Studies at the College of Staten Island, CUNY. She is the author of Double Negative: The Black Image and Popular Culture (Duke, 2018), and her work appears in both academic and popular publications such as The New York Times, The Los Angeles Review of Books, Film Quarterly, as well as other journals and collections. In 2020, she was named an Academy Film Scholars by the Academy of Motion Picture Arts and Sciences. She is currently working on her next book manuscript, titled Hollywood Style and the Invention of Blackness.