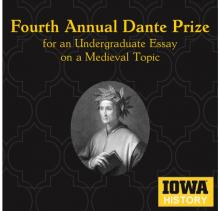 Professor Michael E. Moore, along with the University of Iowa History Department want to announce the winners of the Fourth Annual Dante Prize for an Undergraduate Essay on a Medieval Topic. These three winners were the top essay writers among a competitve group and we wish them an enthusiatic congratulations!

First Prize:
Hannah Olsson, "A Whale of a Time: Gestures that Cure in the Norse Saga."

Hannah is a third-year student who is pursuing three BA degrees in English and Creative Writing, Cinema, and Screenwriting Arts. In this essay, Hannah offers a first-class literary treatment of saga literature, centered on the vividly portrayed, ambiguous, and deeply strange character, Egil. And along the way we learn about the complexity of the religious world of the north. Hannah will receive a scholarship in the amount of $150.

Caroline is a third-year student with a double major in English and History, while also getting her Museum Studies Certificate. Her essay is a great creative look into an important, and troubling, element in Norse sagas and wisdom literature - the presence of destructive, monstrous creatures. Caroline will receive a scholarship in the amount of $125.

Third Prize:
Sophia Gilbert, "How the Irish Created a Civilization."

Sophia is a third-year Honors Student who is double majoring in Political Science and History with a pre-Law concentration. In her crisply-written essay on the history of early Irish Christianity, Sophia shows how Christianity was able to redefine and re-sacralize the landscape of Ireland. She portrays the central role of kingship, and especially focuses on the creation of a distinctively Irish learned form of monasticism, in which literacy and learning became religious acts. Sophia will receive a scholarship in the amount of $100.