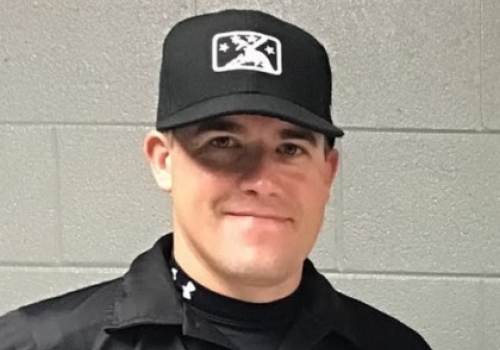 Cody Oakes (right) was drawn to sports participation at a young age. Memories of playing baseball, in particular, span from the recreational leagues in Oelwein, Iowa, to that community’s state tournament appearances at the high school level. His time behind the plate as a catcher extended to Iowa Lakes Community College, as well, and today he realizes how much his experiences in the team setting have influenced his academic goals and career path.

After Cody’s playing days ended, he went in search of another way to be involved with baseball and found his way back behind the plate as an umpire. Summer work at Iowa high schools immediately reinvigorated his passion. He jumped at a chance to attend professional umpire school, and his journey in Minor League Baseball (MiLB) began.

Following the formal training, Cody served a stretch in the Northwoods League and has worked in MiLB ballparks across the nation ever since. Some highlights include umpiring the championship series in both the Class A-Advanced Carolina League and the Class AA Texas League. During the 2018 season, he was a crew chief at the Double-A level and worked home plate for the Texas League All-Star Game. He is now in his eighth year as a professional umpire.

Cody is among the best umpires from Iowa calling balls and strikes at this time. During Major League Baseball (MLB) spring training in 2019, he was assigned his first Cactus League game. MLB personnel monitor his progress by evaluating his current stint in the Pacific Coast League. He is one of 60 Triple-A umpires vying for 12 spots in the Arizona Fall League, which is an important marker for entering the ranks of 76 full-time MLB umpires. 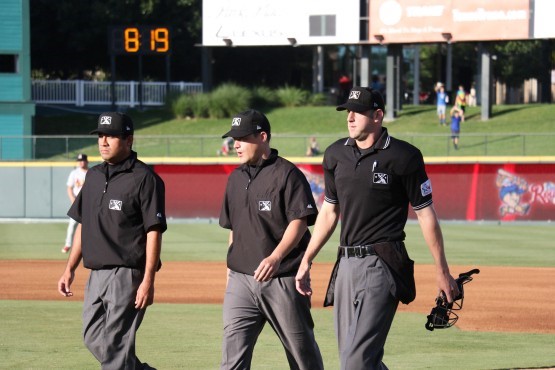 After baseball season concludes, Cody (pictured left, center) will rejoin the Iowa sports landscape as a basketball official. He anticipates being on the court for over 150 games from November through March, contributing to youth events that range from developmental games for third graders to competitive high school contests. “Overall, one of the biggest takeaways from my MiLB journey has been the value of building relationships,” Cody notes, and the skills he has acquired translate well to the school setting.

With Cody’s professional career advancing, the online degree available in Sport and Recreation Management presented a unique opportunity when he enrolled at Iowa in 2018. Some of the sport business coursework has helped him network within the industry and link key concepts to what he has learned on the job. Many class projects and tests have been completed from hotel rooms around the country, and the access to web-based content at any time has been essential. He says, “The program works well for someone in a situation like mine. The flexibility has me on track to graduate from the University of Iowa.”

In addition to time management skills that Cody uses to plan a schedule for studying each week, support of his family and UISRM faculty has been instrumental in his success. For instance, he has been encouraged to deepen an already strong interest in interscholastic sport in eastern Iowa. A high school athletics administrator he connected with while officiating basketball will be his supervisor and mentor during field experience in the upcoming fall semester, and all online degree requirements should be met by May 2020.

Cody Oakes is determined to excel at his craft and have a positive impact on others through sport. When Cody earns his University of Iowa diploma, he probably will be preparing to transition roles and walk onto a diamond in pursuit of his professional dreams. Clearly, those steps signify a way of life for this UISRM student and baseball umpire.