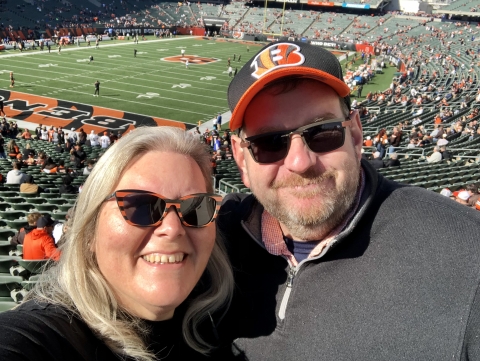 "The Bravo Awards acknowledge individuals who are making our entire community a better place to live, work, and visit. They inspire the rest of us to work harder and notably contribute to the reason we love this community. These residents and leaders add an intangible quality to our area that makes it unlike any other place. They give us confidence in our people and pride in our workplaces, homes and the places we frequent. To those folks, who act for the greater good, we say thank you."

A dedicated teacher and mentor, Packy Moran seeks to help students discover the role they want sport to play in their daily lives. This philosophy has been shaped by a lifetime career across the sport and recreation spectrum himself. And at every stop along the way, he has impacted the lives of countless others in a tremendously positive way.

Among his first jobs in high school were positions at amusement parks and party supply rental companies. For students in middle schools around the state of Ohio, he delivered “The Science of Sport,” a traveling, hands-on museum experience whereby they could learn more about their favorite sports woven into their science curriculum.

He tried his hand at journalism in the earliest days of Major League Soccer, crafting game recaps and collecting bylines from newspapers around the country as their clubs visited his hometown team, the Columbus Crew.

He sampled roles with colleges and universities along the way, too, earning valuable facility operations experience at both George Washington University and Ohio State. Before everyone was podcasting, he was sharpening his communication skills through sports talk radio at George Washington University and earning data analytics experience at his undergraduate alma mater, York College of Pennsylvania.

Marketing and advertising buys were just one component under his purview at Hara Arena in Dayton, OH, a facility that hosted hundreds of events each year and included oversight of both a golf course and social pub. These skills would serve him well in his next role with the Columbus Stars where he oversaw communications and operations for both PDL soccer and UHL hockey teams, in addition to their youth feeder systems. He can still call a pretty good hockey game from the comfort of his sofa, if others are not within line of sight to the television.

He brought enthusiasm and energy to his roles outside of sport, too - which included research and reporting on sales transactions in commercial real estate, hawking political memorabilia to visitors in the nation’s capital, and working the agate desk for the Columbus Dispatch. He also holds a passion for civic community engagement and, if you live in Coralville, he has likely knocked on your door and been willing to talk Iowa politics.

In his shift to academia, Packy stays at the forefront of the sport industry through conferences and sales workshops – where he is part of the University of Iowa team that arranges student consulting experiences with local, regional and national entities.

His academic endeavors have included textbook contributions including the External Relations chapter in Kendall Hunt’s “Event Management Blueprint” edited by Dr. Heather Lawrence and Michelle Wells. He is on several industry research teams featured at the National Sports Forum focusing on best practices in sport sponsorship.

He holds a masters degree in sport administration from Ohio University, the birthplace for the field of study. During his time on faculty there, he oversaw a student-run sport laboratory, the Southern Ohio Copperheads in the GLSCL. As the Associate General Manager of the team, he led an all-student group through every aspect of operations, many of whom now work in major league offices around the country.

Packy joined the University of Iowa in August 2014 and quickly became engaged in the local sports landscape as a fan, participant and advocate. Not even a month after his arrival in Coralville, he was donning a bright pink t-shirt to volunteer for FRYFest. He has worked with a local organizing committee to bring USA Curling National Championships to the region. The inaugural pickleball tournament “Mask Madness” held in March, 2021 in GreenState Family Fieldhouse was coordinated with a great deal of help and insight from his passion for the sport. If there was a “wish list” project for him, bringing professional soccer to the region would surely be on it.

When he isn’t in the stands himself, you might find him working events at Xtream Arena or volunteering for one of the many events hosted by Coralville Parks and Recreation. You’ve likely seen his work if you’ve watched any local HS football, basketball or Iowa Heartlanders Hockey as he keeps data and stats to help MC22 broadcasters tell a compelling story for viewers.

Through it all, he is still working to figure out what role(s) sport plays in his own life - from student of the industry to participant and fan. Most importantly, he is passionate about the ways sport and recreation opportunities build community and strengthen bonds to one another and this place he now calls home.