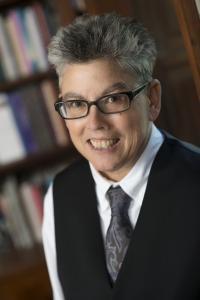 Professor Schwalm is a historian of gender and race in the nineteenth-century U.S., and her research focuses on slavery, the Civil War, and emancipation. She holds joint appointments with the Department of Gender, Women’s, and Sexuality Studies and with History.

Leslie, along with Tom Keegan (Head of The University of Iowa Digital Scholarship & Publishing Studio) is co-director of the Iowa Satellite of the national Colored Conventions Project (http://coloredconventions.org/).  Along with librarians, archivists, faculty, graduate and undergraduate students across the state of Iowa, she is working to recuperate, interpret, and make visible the civil rights activism African American women and men in Iowa in the eight conventions they organized between 1857-1895.  Leslie is teaching a course in the spring semester of 2019, GWSS:3459 Making Change, Making History, in which students engage in research and use the tools of digital humanities to create online exhibits about this unknown but important legacy of social justice activism in Iowa.  Leslie also teaches courses on slavery, women’s history, and the history of the Civil War and emancipation.  She loves engaging with students around issues of activism and the history of inequality in the U.S.

Leslie's first book, A Hard Fight For We: Women's Transition from Slavery to Freedom in South Carolina (1997), studies African American women on the rice plantations in the South Carolina low country. Leslie explores how wartime enslaved women, at the point when slavery was disintegrating, struggled to control their own labor, resist slave owners' demands, survive the violence of the military conflict, and also fought for respect within their own households. The book was awarded the Willie Lee Rose Prize by the Southern Association of Women's Historians in 1998. Leslie also won, in 1998, the Letitia Woods Brown Prize from the Association of Black Women Historians for her article "Sweet Dreams of Freedom: Freedwomen's Reconstruction of Life and Labor in Lowcountry South Carolina."

Leslie's second book, titled Emancipation's Diaspora (UNC Press, 2009), explores how and why Civil War-era emancipation was a national, not only southern, phenomenon. Men and women fleeing slavery during the war made their way to the upper Midwest in the thousands; the Union army, eager to rid themselves of the African American refugees who flooded Union lines in the South, sent many North as well. With the African American population growing and black freedom increasing, the upper Midwest experienced a vigorous contest over the meaning of emancipation and citizenship among white and African American Midwesterners, men and women, during and after the Civil War. She has published two articles related to her research on this project. "Emancipation Day Celebrations: The Commemoration of Slavery and Freedom in Iowa," was awarded the Iowa State Historical Society's Throne-Aldrich Certificate of Recognition. "'Overrun With Free Negroes?’: Emancipation and Wartime Migration in the Upper Midwest," was selected by the Organization of American Historians for inclusion in Best Articles in American History (Palgrave Press, 2006).

Her most recent articles (“A Body of ‘Truly Scientific Work:’ The U.S. Sanitary Commission and the Elaboration of Race in the Civil War Era, The Journal of the Civil War Era, Vol. 8 No. 4 [2018], 647-63, and “Surviving Wartime Emancipation: African Americans and the Cost of Civil War,” Journal of Law, Medicine, & Ethics, Vol. 39, issue 1 [2011])  come from her current book project on the wartime elaboration of racial science and medicine by northern whites.