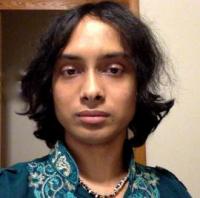 Aniruddha Dutta is an Associate Professor in the departments of Gender, Women’s and Sexuality Studies and Asian and Slavic Languages and Literatures at the University of Iowa. Dutta is interested in the study of contemporary globalizing processes, the political economy of gender and sexuality, transnational discourses and practices of development, and the institutionalization of gender and sexual identity politics, with specific reference to India and South Asia.

Their research and teaching interests include:

Their work has appeared in journals such as International Feminist Journal of Politics, Transgender Studies Quarterly, QED: A Journal in GLBTQ Worldmaking, Gender and History, Atlantis, SAMAJ, and South Asian History and Culture.

Their current book project, Globalizing through the Vernacular: The Making of Gender and Sexual Minorities in Eastern India, explores the role of seemingly peripheral or “local” communities, particularly the trans feminine spectrum of kothis and hijras, in the globalizing expansion of liberal democratic discourses of gender/sexual identity and rights. The book studies how this interactive process transforms or reproduces systemic hierarchies of language, scale, class, caste, and citizenship. The book theorizes such hierarchization through the concept of “vernacularization,” reinterpreting the term beyond its typical academic meanings - the adaptation of global discourses into the vernacular or the rise of vernacular cultures - to rather signify the ways in which communities (such as the kothi-hijra spectrum) and related discourses are produced as “local” or “vernacular” despite their mediatory role in transnational and globalizing processes. Dutta is also working on a second book project, tentatively titled Travails in the Hinterland: Lagan Dancers and the Political Economy of Caste and Gender in North India.

Dutta also works as a volunteer and advisor with community-based organizations of queer and trans (especially kothi and hijra) communities in West Bengal, eastern India. Dutta writes in both English and Bangla, and aspires to interrogate hierarchies of knowledge production based on language and socio-economic or geographical location.

Dutta, A. (2019). “On Queerly Hidden Lives: Precarity and (In)visibility between Formal and Informal Economies in India,” QED: A Journal in GLBTQ Worldmaking 5:3.

Dutta, A. (2015). “Beyond the Binary: (Trans)gender Narratives and Class Distinctions in Rituparno Ghosh’s Later Films,” South Asian History and Culture 6:2.

Dutta, A. (2013). “Legible Identities and Legitimate Citizens: The Globalization of Transgender and Subjects of HIV Prevention in Eastern India”, International Journal of Feminist Politics 15:4.