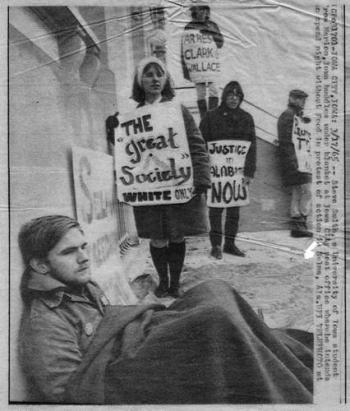 David F. McCartney and James A. Petersen have endowed the Stephen Lynn Smith Scholarship (SLSS) with a generous gift! On behalf of our students, faculty, and staff we thank you for your continued support!

GWSS honors Stephen Lynn Smith (1944-2009) for his commitment to social justice in Iowa and beyond. Smith was born in Cedar Rapids and raised in nearby Marion. A 1963 graduate of Marion High School, he enrolled in the ROTC program at the State University of Iowa (the original name for the University of Iowa) that summer, majoring in engineering. Perhaps influenced by the 1963 March on Washington that August, Steve embraced the Civil Rights Movement. He soon joined the local chapter of the Student Non-Violent Coordinating Committee and in 1964 participated in Freedom Summer, an effort to register African Americans in Mississippi to vote. He was one of over 800 volunteers from across the country. Smith was involved in various protests in the preceding years including against the Vietnam war.