Full article (via Iowa Graduate College) can be found here.

Over the last 150 years, Iowa has experienced a nearly total transformation of its landscape. Once characterized by tallgrass prairies and oak savanna, it quickly became home to farms and budding urban communities during the 19th century, and within just a few decades, Iowa helped shape the Corn Belt of the American Midwest. This dramatic change hasn’t just redefined the land itself but also the wildlife that depends on it.

Doctoral candidate Brandon MacDougall has set out to study precisely how Iowa’s shift toward urban and agricultural landscapes has influenced distribution of the state’s mesopredators. With apex predators like wolves, bears, and mountain lions having long been ridden from of the state, MacDougall’s scope includes coyotes and foxes as well as smaller mammals like raccoons, skunks, badgers, and mink.

A native of rural Boone, the geography student returned to his home state from Oregon with the encouragement of his advisor, Dr. Heather Sander, who had been focusing on birds’ coexistence with urban forests.

“She gave me free range to explore themes somewhere in that intersection of urban ecology and geography, and how we can map different things in the environment and relate that to things we see with plants and animals,” he recalls.

MacDougall soon took interest in mapping with geographic information systems (GIS) coupled with data collected from camera traps, also referred to as trail cameras. He and his research team in the UI Department of Geographical & Sustainability Sciences received a $10,000 grant to spur their work. Over the course of three years, they have installed cameras for one-month intervals in every season. The team has coordinated with the Army Corp of Engineers, local parks departments, and private property owners to establish sample sites in Iowa City, Coralville, and North Liberty. This includes cornfields, natural areas like the Coral Reservoir, and city parks.

“My overarching hypothesis or my desire to study this research here is cities might be providing better habitat for wildlife than the rest of the area around them,” MacDougall explains. “That just hasn't been fully studied in a lot of different angles.”

He cites the Iowa of the 20th century as lacking habitat for its historical wildlife, noting monoculture’s eradication of food sources. “If we look at this landscape as a broad swath of agriculture, plopped in the middle of that landscape is cities,” he explains. This provides green space via yards, parks, and natural ravines that attract mesopredators.

In addition to local fieldwork, MacDougall’s research alongside undergraduates has expanded to encompass data from six Midwestern cities, including Chicago, St. Louis, and Indianapolis. This, he says, has allowed him to draw some bigger conclusions about how species respond to urbanization by removing some of the factors that differ from city to city.

“I also just finished another study where being part of this network (the Urban Wildlife Information Network) has been a huge boost to my research and the things I can do, because now I have this pool of other cities across the U.S. and the networks actually expanded into Canada recently,” MacDougall notes. “Researchers collecting data in the same way, using these trail cameras, setting up sampling schemes going from urban all the way to rural.”

MacDougall’s last study of the Midwest looks at variables on the human population, including population density, and racial makeup. This found correlation between higher socio-economic status and likelihood of hosting red fox, which tend to thrive in more heavily urbanized areas. Coyotes, on the other hand, favor suburban spaces but shy away from denser human populations that don’t deter the fox.

“The thing about urbanization is it often changes how species act and how they act with each other,” MacDougall explains. “So, it may be that what we know about species behaviors in the wild doesn’t carry over to urban environments. For example, coyote and red fox may not compete as much for resources in cities.”

While they may not be fully comprehensive, MacDougall, who anticipates graduating in spring 2021, sees his findings as a starting point to reevaluating urban development in the Midwest with struggling native species in mind.

“As an ecologist, one of my biggest goals is conservation of wildlife and environments,” he notes. “In the future, if we want to keep the species as humans continue to expand urban areas, how can we develop the proper green spaces in our cities?”

Looking ahead to graduation, MacDougall sees himself applying his experience at the University of Iowa into potentially serving as an ecologist or geographer for a park service, state government, or nonprofit.

“The Graduate College has been a good support system, especially in my later years here with a couple different fellowships,” he says, noting a Post-Comprehensive Fellowship that gave him a semester off from teaching assistance duties.

Although his career path was far from linear, including various changes in majors and a five-year stint in the Army midway through his undergraduate degree, MacDougall appreciates the diverse route that ultimately brought him to this stage at Iowa.

“Somehow all of that gave me the clarity to come back to what I really care about,” he reflects. “Being part of the earth and helping the environment.”

Cale Stelken is Creative Coordinator at the Graduate College. 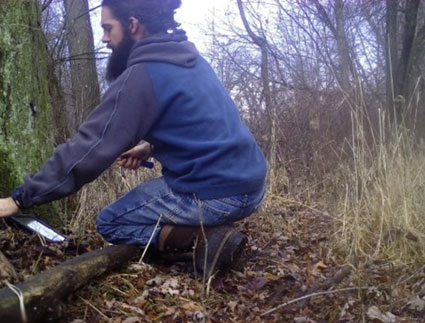