Environmental Policy & Planning alum, Emily Manders (20BS), was recently featured in The Daily Iowan for her environmental activism and sustainability efforts on campus.

Emily Manders began her college career as a sports and recreation major. After she joined the University of Iowa Environmental Coalition, however, she realized sustainability was her true passion.

From her work as the director of sustainability for Undergraduate Student Government to being the project lead intern for the UI Office of Sustainability and the Environment, Manders has made her impact on campus environmental efforts over the course of her UI career.

Her role as co-president of the UI Environmental Coalition kindled her interest in the environment during college, she said, and the organization is quite important to her.

“Just such great memories being with people who were similarly like-minded like me and just showed me how I could be a leader,” she said of her time with the coalition.

Manders said some of her triumphs in her time with the coalition happened this year, despite COVID-19.

The coalition protested the UI’s use of pesticides on campus, bringing several dozen people to the Pentacrest to protest the continued use of fungicides, insecticides, and herbicides that are linked to adverse health effects.  After sending a letter to administrators this fall about releasing a pesticide report that collected data from 2018, the UI released it this spring.

“It really has inspired me and just made me feel that the future of UIEC is awesome,” Manders said.

Graduating with a degree in environmental policy and planning, Manders plans to stay in Iowa City for another year working for the Green Iowa AmeriCorps this summer. She added that she hopes to attend graduate school sometime in the future.

Finishing school during the pandemic, Manders said the thing that has kept her going is her involvement in student organizations.

“To be the best advocate for our Earth, I knew I had to have an education,” she said.

A major motivator for Manders as a college student was role model and former Environmental Coalition President Eden DeWald.

“[She] was the one who really inspired me to go after what I wanted,” she said. “She had previously been involved in everything and I was like, ‘I want to do that, I want to advocate for the Earth like she does.’”

Third-year student and co-president of UI Environmental Coalition Jacob Burr wrote in an email to The Daily Iowan that he has loved working with Manders.

“This was quite an unusual and challenging year to be running a student org, but Emily met it head-on and worked to make it both a productive and fun year for our org, despite the complications,” he wrote.

One of Burr’s favorite memories from working with Manders was planning the protest against pesticides on campus, he wrote.

“Going into this year, we both wanted to get the Environmental Coalition more involved with activism and we wanted to start planning our own actions,” he wrote. “Unfortunately, because of COVID, we didn’t have many opportunities to plan in-person actions, so our protest ended up being one of the few times our org met in person this year. It was a lot of fun to plan and participate in with Emily and I wish we would have been able to plan more protests together.”

Project Lead Intern in the UI Office of Sustainability and the Environment Joseph Haggerty wrote in an email to the DI that Manders’ dedication to her work has made her a great leader.

“Emily is selfless in her work and has shown a dedication to making sure all voices are heard when considering how to implement sustainable initiatives throughout campus,” Haggerty wrote. “Her drive to better the environmental communities around her serve as a constant reminder of her overall dedication to community outreach and engagement.”

Haggerty added that he will miss working with Manders, mostly because of her hard work and dedication.

“Every meeting and every action she took in her various roles throughout campus was executed with a mentality of creating a tangible difference which exemplifies her passion for the environment and people,” he wrote. “I will miss her constant drive to create change and always making noise for causes which are rooted in compassion and creating a better world.”

For undergraduate students and those getting close to graduating, Manders recommended to not be afraid to try new things out.

“When I first got into college, sure I was sustainability-minded, but I was not where I am at now,” she said. “I think that college is a perfect time for that.”

University of Iowa senior and Co-President of the University Environmental Coalition, Emily Manders, poses for a portrait on the Pentacrest on Sunday, May 2, 2021. 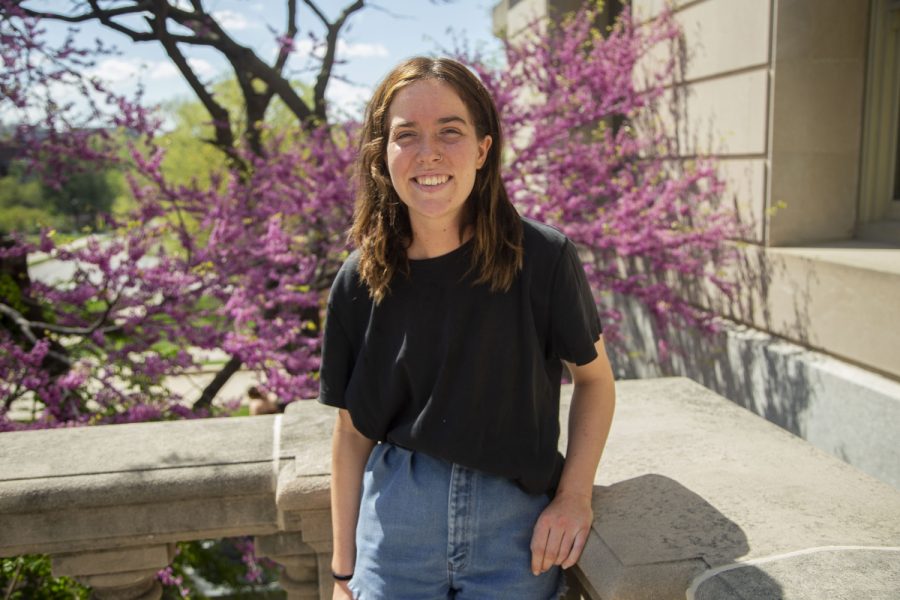