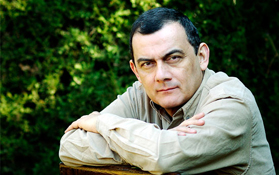 The Chilean Ministry of Culture has announced that Horacio Castellanos Moya, assistant professor of Spanish and Portuguese at the University of Iowa and a teacher in the MFA in Spanish Creative Writing Program, has won the Premio Iberoamericano de Narrativa Manuel Rojas, or the Manuel Rojas Iberoamerican Prize for Fiction.

The President of Chile, Michelle Bachelet, will present a medal to Castellanos, a renowned Salvadoran writer, later in 2014. Considered one of the top literary prizes in the Spanish-speaking world, the prize—awarded for work over a career, rather than a single book— includes a $60,000 cash award.

Castellanos expressed his gratitude for the award.

"It is a great honor to receive this award from the government of Chile," he said. "It is wonderful to have international recognition of my literary work."

“Horacio Castellanos Moya is one of the most inventive fiction writers working today. His explorations of the human condition, rooted in his deep knowledge of politics and the mysteries of the heart, are endlessly fascinating,“ Merrill said. “He is a world treasure. We are extremely fortunate to have such a vibrant presence in our UNESCO City of Literature.”

“Horacio has one of the most incredible literary trajectories of work, with novels that are key to understanding Central American realities and today’s literary sense," Merino said. “He is one of the most relevant writers alive and has a deep understanding of human conflict and its contradictions. We are extremely proud of having him as part of the MFA in Spanish Creative Writing Program.”

Horacio Castellanos Moya is a writer and a journalist from El Salvador. For two decades he worked as the editor of news agencies, magazines and newspapers in Mexico, Guatemala and his own country. As a fiction writer, he was granted residencies in a program supported by the Frankfurt International Book Fair (2004-2006) and in the City of Asylum program in Pittsburgh (2006-2008). He has also taught in the Writing Program at the University of Pittsburgh. In 2009, he was guest researcher at the University of Tokyo with a fellowship granted by the Japan Foundation. He has published ten novels, five short story collections and a book of essays. His novels have been translated into ten languages; four of them (Senselessness, The She-Devil in the Mirror, Dance with Snakes and Tyrant memory) are available in English.

The prize, named after Chilean writer and journalist Manuel Rojas, is sponsored by the Manuel Rojas Foundation, with the winner chosen by an international jury of writers. Rojas won the Chilean National Prize for Literature in 1957. He taught in the U.S. and Chile, and died in 1973 in Santiago.

Read the Spanish-language announcement from the Chilean Ministry of Culture.

The Department of Spanish and Portuguese is part of the Division of World Languages, Literatures and Cultures in the UI College of Liberal Arts and Sciences.