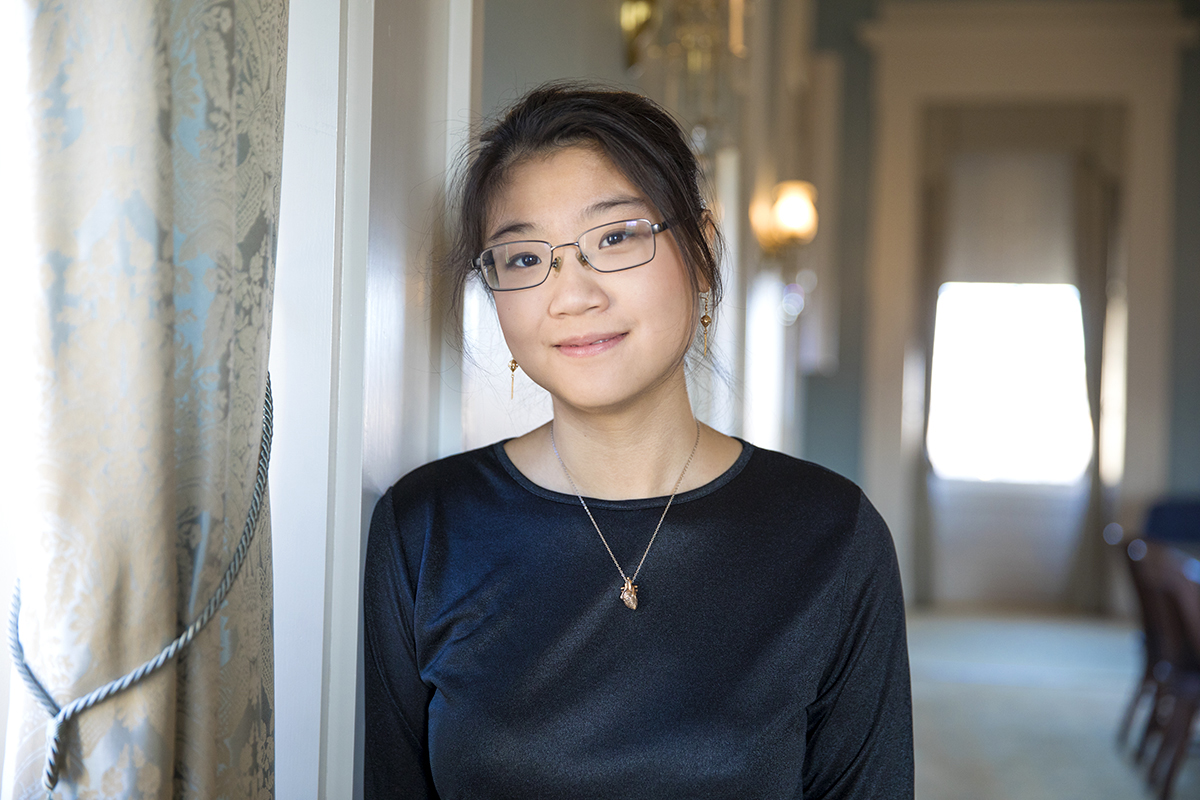 “Let’s choose to take care of each other.”

Leela Sathyaputri, who hails from Iowa City, won the competition to be the student speaker at the December 2018 College of Liberal Arts and Sciences Commencement ceremony. She is graduating with High Distinction and University Honors, having completed the major in Psychology with a minor in Spanish. She has been on the Dean’s List throughout her time at Iowa, and has been inducted into Phi Beta Kappa, the nation’s most prestigious honor society in the liberal arts.

Taking full advantage of being at a major research university, Leela has conducted high-level research as an undergraduate. She has worked directly with several faculty members in the Carver College of Medicine Department of Psychiatry, receiving fellowships from the Iowa Center for Research by Undergraduates. She is co-author of a published paper in the American Journal of Medical Genetics, and has studied abroad to perform public health research in the Dominican Republic.

With certification in Trauma-Informed Care, Mental Health First Aid, Peer Support, and Nonviolent Crisis Intervention, Leela is a Mobile Crisis Outreach Counselor for the Johnson County Crisis Center, working to defuse crisis situations in emergency rooms, jails, and other sites throughout a large area in Iowa.

After taking some time off to breathe after graduating, she plans to pursue medical school.

Leela wrote her Commencement speech as “a reflection on solidarity, bravery, and sensitivity to the experiences that make us human.” Listen to her address to her fellow graduates here: 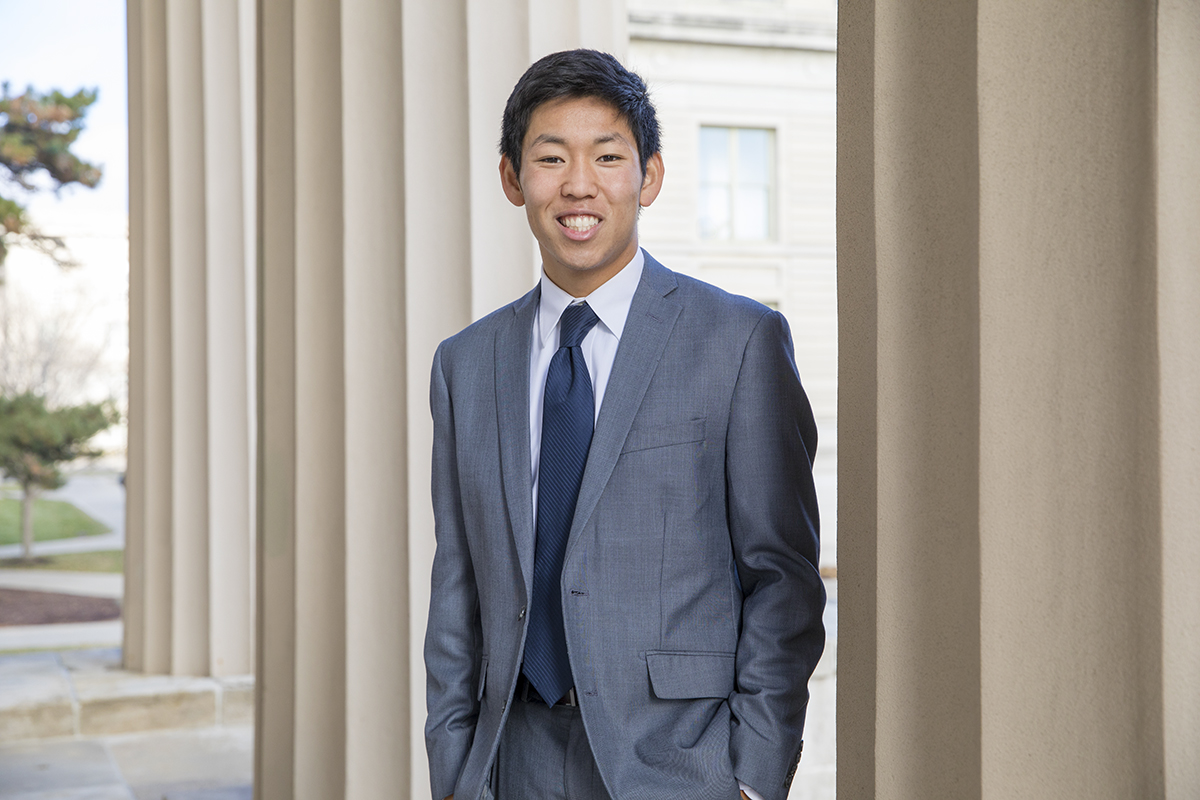 Marcus Miller, a graduating senior from Johnston, Iowa, is a finalist in the competition to be the student speaker at the December 2018 College of Liberal Arts and Sciences Commencement ceremony. Marcus is graduating with Highest Distinction and University Honors, having completed the majors in Political Science (with honors) and Ethics and Public Policy, as well as minors in Philosophy and Business Administration. He has been inducted into the nation’s prestigious scholarly honor society, Phi Beta Kappa.

During his time at Iowa, he has been a Resident Assistant in the dorms, a Communications Intern for the American Civil Liberties Union, and an Intern for the Sexually Violent Predator Unit Program in the Iowa Attorney General’s office. Marcus has been a committed volunteer on campus and in the broader community, including establishing the UI chapter of Love Works, a religious student group focused on service and social justice. He also co-founded a nonprofit organization in his hometown called Project Silence No More, which addresses mental health and suicide in the community.  As if all of that weren’t enough to keep him busy, he has published essays in two collections, Our Witness: The Unheard Stories of LGBT+ Christians (2018) and What We’re Passionate About: An Anthology of Essays Written by America’s Young Leaders and Activists (2017). A national qualifier for the UI Mock Trial team and a Mock Trial coach at the high school level, next up for Marcus is law school.

In his speech, Marcus remembers all the people who helped his fellow graduates and him get to this point. He reminds his listeners that “our education is not just for us, it’s for the people around us,” and urges them to be of service. Listen here: 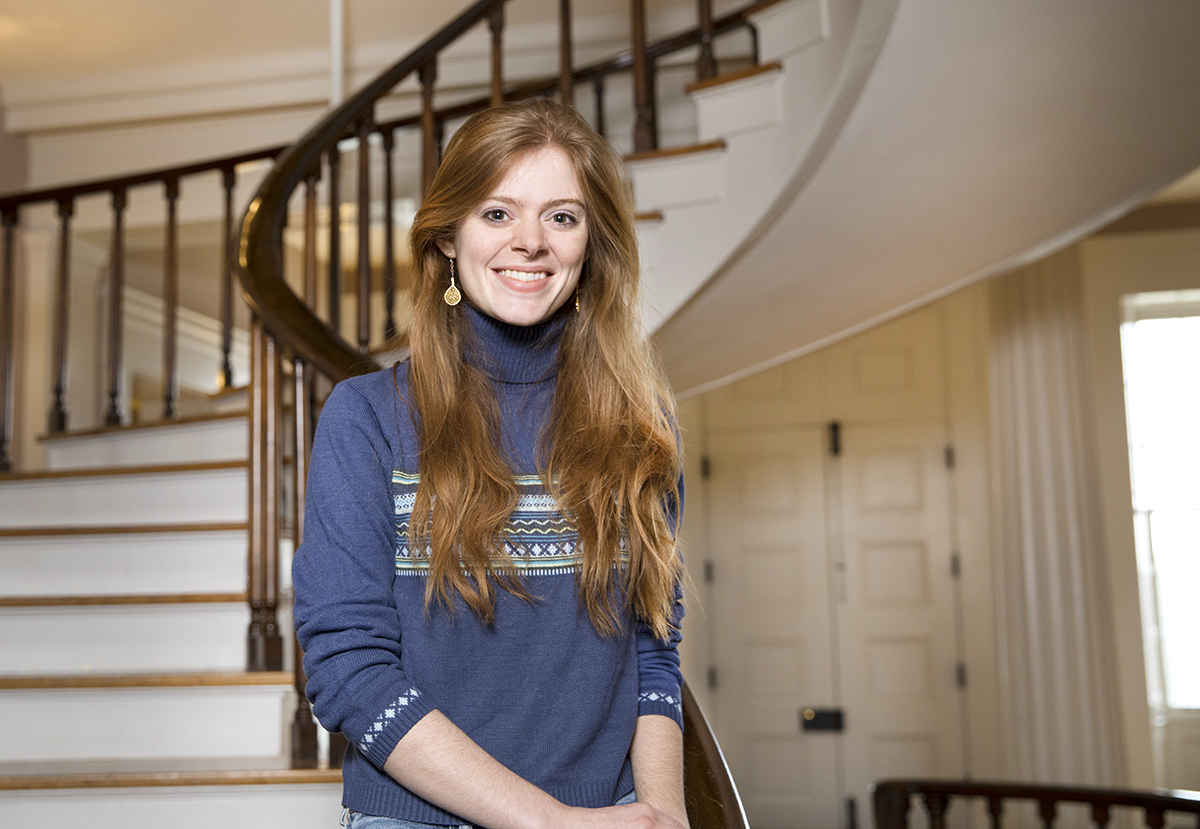 Isabel Ramos Granja Reed is a finalist to be the student speaker at the December 2018 College of Liberal Arts and Sciences Commencement ceremony. As a transfer student who joined the University of Iowa as a junior, Isabel’s pathway to Commencement is a little different than most of her fellow graduates—but her Iowa experience has been no less meaningful. She is graduating with Distinction, having completed the major in Psychology and earned the Certificate in Non-Profit Management.

While at Iowa, Isabel became an entrepreneur, launching her own business called Comigo, an online platform to help college students find new collaborators on their campus. Building on its success on campus—and supported by the UI’s John Pappajohn Entrepreneurial Center—she has successfully pitched the idea at competitions, and hopes to start licensing the app to other colleges and universities.

In her speech, Isabel talks about her gratitude for finding an academic home at Iowa, where she has had the ability to discover and explore all of her many passions. Listen here: 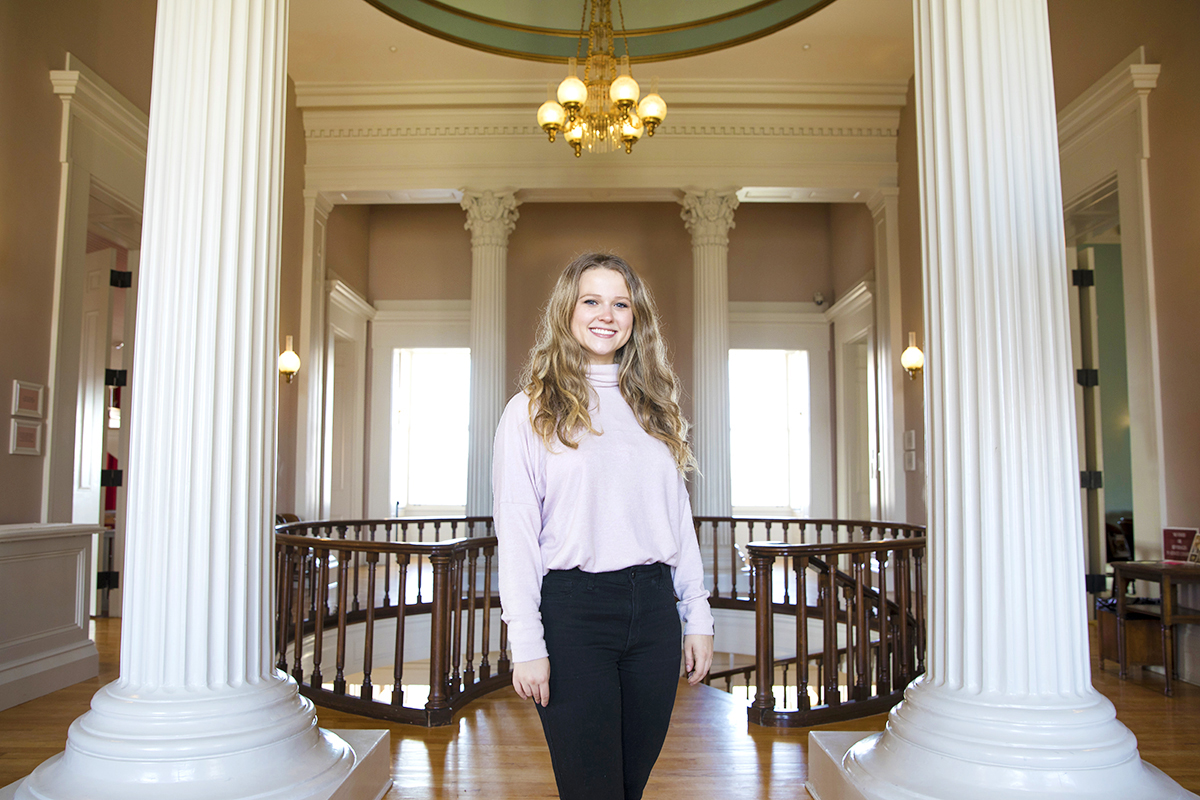 “Ask for help, and help others.”

Corrine Jones, who came to the University of Iowa from Greenfield, Iowa, is a finalist in the competition to be the student speaker at the December 2018 College of Liberal Arts and Sciences Commencement ceremony. Corrine—a Communication Studies major with a minor in Gender, Women’s and Sexuality Studies—is graduating with High Distinction, University Honors, and Honors in the Major, and has been welcomed into Phi Beta Kappa, the nation’s most prestigious academic honor society in the liberal arts. She volunteers in the community, and is working on a research project on interpersonal communication with Assistant Professor Sylvia Mikucki-Enyart, with anticipated peer-reviewed publication in 2019.

Corrine’s career interests lie in media studies, particularly on the depiction of women in the media, and her next step is graduate study in the field.

Corrine’s speech sums up her Iowa academic career by asking her fellow graduates to remember the kindness of others that brought them here, and to remember to always be there for others. Listen here: 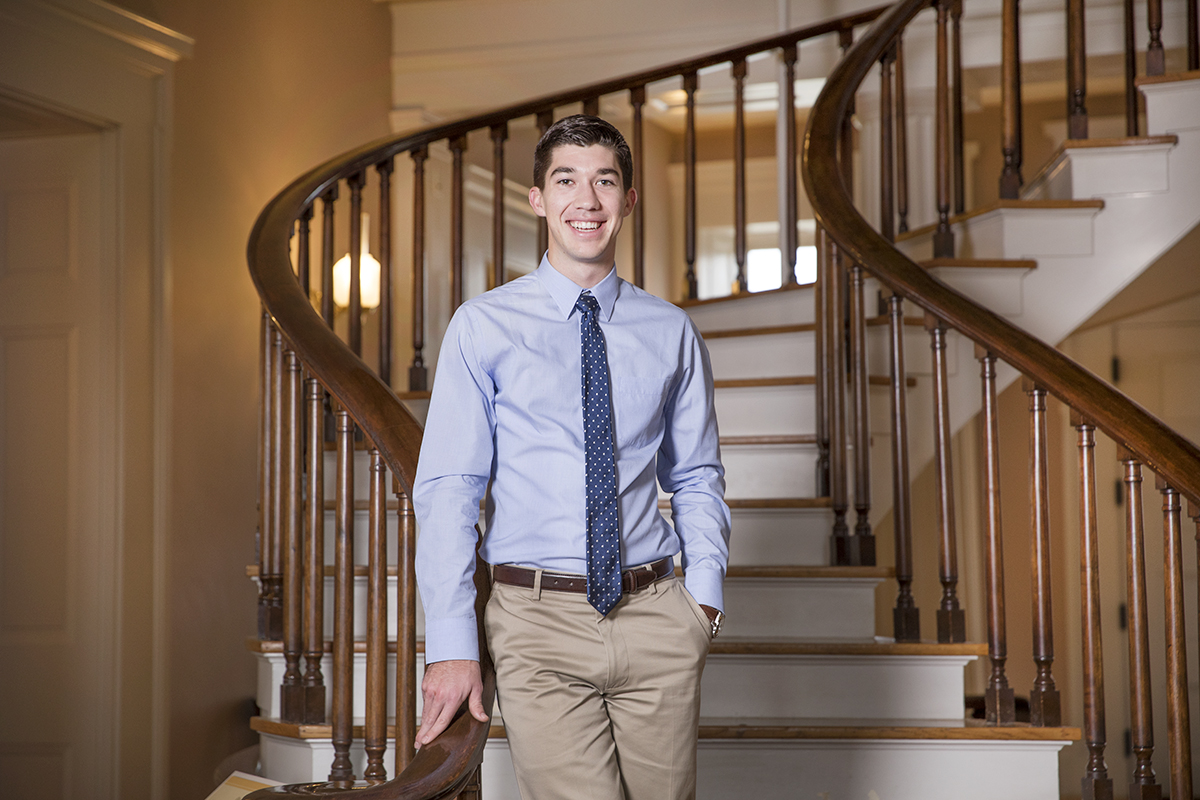 “Be an active champion of a life you’ll be proud to build.”

Jack Moss, who came to the University of Iowa from Bettendorf, Iowa, is a finalist in the competition to be the student speaker at the December 2018 College of Liberal Arts and Sciences Commencement ceremony.

Jack is graduating with Distinction, having completed the major in Human Physiology and earned the Certificate in Entrepreneurial Management.

He serves as the Alumni Relations Chair for Dance Marathon, with which he has been involved throughout his time at Iowa. He was inducted into Sigma Nu Tau, a national entrepreneurial honor society, and has conducted research in the Lira Human Physiology Laboratory. While at Iowa, Jack studied abroad in Australia and took a mission trip to Haiti, experiences that instilled deep respect for and interest in diverse cultures. He will be attending the University of Iowa Physical Therapy program.

Jack’s speech encourages his classmates to use their UI education to create lives they can be proud to live. Listen here: