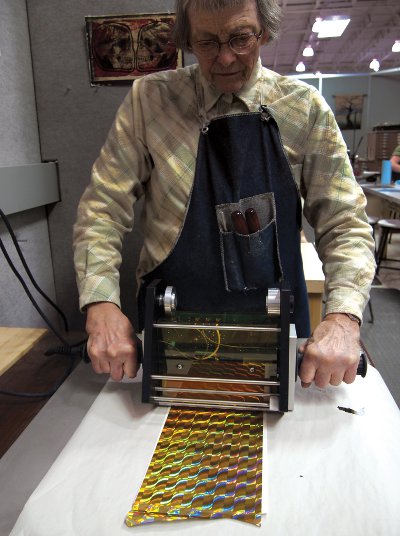 Virginia Myers died following a brief illness in Iowa City on December 7, 2015, at the age of 88. After receiving a B.A. degree (1949) in painting and drawing at the Corcoran School of Art and George Washington University, and the M.F.A. (1951) from the California College of Arts and Crafts, she came to Iowa City and the University of Iowa in 1955, unannounced, to study printmaking with master printmaker Mauricio Lasansky. Before being taken on as his assistant, she supported herself independently.

She received a Fulbright Fellowship to Paris in 1961, where she studied at Stanley William Hayter’s famed Atelier 17. She had the opportunity to stay on there, but Lasansky called her back to Iowa City to join the faculty as one of the pioneering women on the teaching staff. She remained for 50 years, until her retirement in 2012. Upon her retirement, she received emerita status in the School of Art & Art History.

Myers was a forerunner in the field of innovative intaglio, her medium of choice. She adapted the commercial process of foil stamping to the fine art studio. This required not only the development of a new technique but also the invention of a new device for the heated application of colored foils to paper surfaces. This she called the Iowa Foil Printer and she termed the process “foil imaging.”

She dedicated the last decades of her life to advocating for the unique reflective aesthetic of foil imaging as a new art form. Three books resulted from this campaign. The first, Foil Imaging: A New Art Form, published in 2001, introduced the process to the art world. The second (2006) made available actual editions produced by artists who learned foil imaging from Myers. Just days before her death, she sent to the publisher the completed manuscript of a third volume dedicated to foil imaging.

In the years just prior to her retirement she devoted much of her time to organizing the Iowa Print Group Archive initiated in 1945 by her mentor, Lasansky. This is a teaching collection of the prints made by School of Art & Art History printmaking students and visiting artists over the course of 70 years. It is a unique and invaluable teaching resource for printmaking students now and in the future.

Myers had more than 100 one-person shows and her work is included in collections at the National Museum of Women in the Arts, Washington, D.C.; the Toledo Museum of Art, Toledo, Ohio; the San Francisco Art Museum, the Nelson-Atkins Museum in Kansas City; and the Des Moines Art Center, Des Moines, Iowa. She received grants from the Fulbright Commission, the National Endowment for the Arts, and the Iowa Arts Council and, in 2009, she received the Excellence in Teaching Award from the Southern Graphics Council, the national professional organization of printmakers.