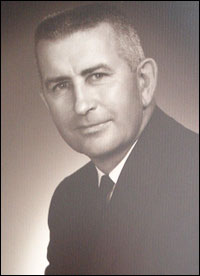 On July 16, 2005, Dr. James F. Curtis passed away at the age of 91 in Missoula, Montana. Dr. Curtis was a professor emeritus of The University of Iowa. Throughout his professional life, he was one of the most highly regarded university professor/scientists in the field of communication sciences and disorders. He was a first rate scholar, an excellent and demanding teacher, and a mentor and friend to the students he taught and to his professional colleagues.

Professor Curtis was born on a farm near Charles City, Iowa. He received a B.A. degree from Iowa State Teachers College (now the University of Northern Iowa) in Cedar Falls in 1935. He did his graduate work in speech pathology and audiology at The University of Iowa and received a Ph.D. in 1942. During World War II he worked for the U.S. Army Signal Corps and the Army Air Corps, doing research on speech perception at the Harvard Psychoacoustic Laboratories with scientist S.S. Stevens.

After the war, Dr. Curtis joined the faculty at The University of Iowa. When the Department of Speech Pathology and Audiology was formed in 1956, he was selected as its first chairman and he served in that role for 12 years. Under his leadership, the department achieved its status of a world-class program dedicated to excellence in teaching and research. He played a major role in the consolidation of the department and the clinic and in the plans for the Wendell Johnson Speech & Hearing Center. He retired from The University of Iowa in 1979.

Professor Curtis is best known for his love of teaching and his dedication to helping students do research. Throughout his career at Iowa, he played a major role in the training of a generation of speech scientists who have gone on to be the leaders in the field. His dedication to student research did not end with his retirement from The University of Iowa. Over the years, he made generous contributions to a fund in his name at the University of Iowa Foundation, the purpose of which is the support of student research. His mentorship did not just extend to his students, but also to his many colleagues on the faculty. He set the standard of how to be a serious scientist and a fine teacher. He was never shy to provide insightful critiques to ensure that the end product would be the best. No matter how critical his comments might have been, they were always taken as tokens of his genuine interest and concern.

Dr. Curtis served as president of the American Speech-Language-Hearing Association (ASHA). He was an advocate for the funding of research and doctoral training in communication sciences and disorders with the National Institutes of Health. He received many honors for his contributions to the profession, including the Honors of ASHA and the International Phonetics Society, fellowship in the Acoustical Society of America, and the distinguished alumnus awards from The University of Iowa and the University of Northern Iowa.

Professor Curtis had interests that ranged beyond the classroom and the laboratory and he made sure to include his students and colleagues in those interests. He had a great love of the outdoors and successfully instilled that love in anyone who worked with him. He showed all too many overly serious folks that one should savor life and have a little fun as well. After he retired from The University of Iowa, he was able to devote his considerable energy and talents to the Sierra Club and Wilderness Watch. With fervor and intensity, he instilled in those who knew him a keen appreciation of the fragility of our environment and of our collective responsibility to protect it for generations to come.

Professor Curtis accomplished what he set out to do. He trained a generation of scientists who have made significant contributions to our understanding of communication sciences and disorders. He made regular visits back to Iowa City to catch up on the latest developments in the department. He may have retired in 1979 but he continued to take responsibility for the future health of the department and the profession. He will be missed, though his influence on future generations will endure.