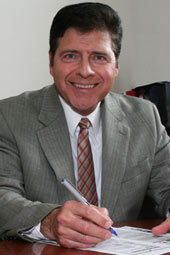 The Executive Associate Dean, Raúl Curto, directs the faculty recruitment, appointment, and review processes and the appointment of teaching assistants. He also administers University personnel policies for faculty and graduate assistants in the College.

Dean Curto earned his teacher certification and licenciate in mathematics from the Universidad Nacional de San Luis in Argentina, and went on to earn his MA and PhD in mathematics from the State University of New York at Stony Brook in 1978. He has been a member of Iowa's mathematics faculty since 1981, was a Faculty Scholar during 1988-91, and, in addition to teaching, has served in a number of administrative capacities, including chair of the Department of Spanish and Portuguese. He became the College's associate dean for faculty in 1996 and was named executive associate dean in 1998. In recognition of his efforts and success in promoting cultural diversity, he was named the College's director of diversity in 2004.

An internationally respected mathematician, Dean Curto has given more than a hundred invited talks on five continents. His research interests include multivariable operator theory, C*-algebras, several complex variables, and classical theory of moments. He has had continuous research support from the National Science Foundation since 1980. His most recent monograph, Joint Hyponormality of Toeplitz Pairs (co-authored with W. Y. Lee), was published in 2001. In recognition of his outstanding record of teaching, research, and service, he has been named a Collegiate Fellow for 2002-2017.