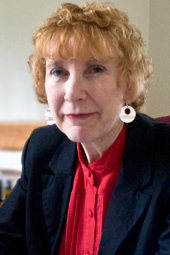 The Associate Dean for Undergraduate Programs and Curriculum, Helena Dettmer, oversees the development of educational policy and the administration of the College curriculum, including the General Education Program. She directs the Office of Academic Programs and Student Development and chairs the CLAS Educational Policy Committee,and the Student Academic Standards Committee. She also serves as the College liaison to the Registrar, Admissions, and Orientation, and exercises oversight and leadership to guide and enhance online education initiatives.

A professor of Classics, Helena Dettmer earned a BA in Classics at Indiana University and a PhD from the University of Michigan, joining The University of Iowa faculty in 1976. A recipient of the May Brodbeck Humanities Fellowship, she was also named a Faculty Scholar in 1986. She is recognized as an expert in the intersection of meaning and structure in Latin poetry, and her two books explore this topic, Horace: A Study in Structure and Love by the Numbers: Form and Meaning in the Poetry of Catullus. She has co-authored the following pedagogical publications: A Workbook to Ayers' English Words from Latin and Greek Elements, in its second printing and used widely in vocabulary-building courses around the country; A Catullus Workbook, a manual for teachers of AP Catullus, also in its second printing; and Latin for the New Millennium Level 3, which is in its second printing as well. She recently completed a book-long monograph titled Issues of Unity in Ovid’s Tristia, which has been accepted by Peter Lang Publishing.

Professor Dettmer served as chair of the Department of Classics (1993-2001) and as interim chair of French and Italian (1998-99) before being selected as founding director of the Division of Interdisciplinary Programs in 2001. She has recently has been reappointed as the Division's director in addition to her work as the Associate Dean.

Contact Adam Jaschen at (319) 335-2633 to schedule an appointment with Associate Dean Dettmer.